“Differences simply act as a yarn of curiosity unraveling until we get to the other side.”
– Ciore Taylor

Peace Corps Volunteers have the unique opportunity and ability to learn the humility and compassion that is required for intercultural communication. At the core of all cultures are varying power structures, different ways of communicating, contrasting perceptions of time, alternate ways of viewing the individual, different processes of thought, etc. etc. We can’t experience another culture while saying “this makes no sense” whenever someone does or says something that is different from, or contradicting to, our own values and beliefs. We have to be open to seeing the differences, even in intense situations, and then have the curiosity and patience to piece together the puzzle of “why” without unnecessary judgment.

As a volunteer, I’ve had the pleasure of navigating a very different culture that was, but no longer is, foreign to me. What was once so daunting and overwhelming about communication styles, or the perception of personal space, or the carefree and relaxed understanding of time, no longer weighs on me. The values and habits associated with Tanzanian culture have now become familiar to me – or I’ve entirely adopted them myself.

Different cultural values lead to different morals and societal standards, and the journey through these can be challenging, but is also very rewarding. One aspect of the culture and society that I must negotiate on a daily basis in the village involves the power structures here. When considering POWER as a cultural value, there are two sides to the spectrum: hierarchy and equality. At one end, if hierarchy is valued, the power differences between individuals and groups are major aspects of the every day. However on the other side, if equality is valued, the society tends to be doing its best to minimize levels of power.

In Tanzania and in my village, power is definitely hierarchical – and not only for the levels of governmental power, or economic class, but also for the average Tanzanian family through gender norms. I, of course, follow the political hierarchy in my work. It is necessary for me to fit in and use the pre-existing system familiar to those I work with, if I wish that work to be sustainable. I need to start in the proper places to get the proper approval, and therefore support, before proceeding.

When it comes to the family hierarchy (and the gender hierarchy on which it is based), I understand it, and for the most part I follow it, but I also enjoy challenging it in small, non-earth-shattering ways. Living in one village for two years and becoming a member of that community is amazingly impactful because it gives us as volunteers the ability to integrate – to understand and to be understood. As an integrated and trusted community member, we can then have discussions about different cultural norms with those willing to open their minds with us.

I’ve had many involved and inspiring debates with two of my male counterparts in my village. Our most recent discussion covered the charged topic of homosexuality (in addition to abortion and a woman’s right to choose, immigration, and dictatorships versus democracies – a conversation inspired by our dear President Trump). Homosexuality is “illegal” in Tanzania, and many people don’t believe it’s real, or they think it’s just an American thing.

The whole concept of homosexuality is nearly (but not quite) impossible for many people here to wrap their heads around. What I find most interesting about this topic are the assumptions about homosexual lifestyles – that they could never work – which are entirely based on the cultural value of a hierarchical power structure, in this case based on gender norms.

Men are the heads of the households. In my village they have one or many wives, they do most of the heavy labor, such as well drilling (above), and are in charge of finances and making decisions for the family. Women follow their husbands. They maintain the household (all the cooking and cleaning), tend the farms, and raise the children, but they are not in charge. One interesting indicator of gender roles/norms in Tanzania is in the Swahili language itself. When a couple is married, two different verbs are used: For men: kuoa = to marry. For women: kuolewa = to be married.

My counterpart in the village told me it could not work if two men lived together as a married couple, because in a couple there is a man and a woman for a reason: “the man is the head and the woman is the tail.” If two men were together they would never be complete, and they could never work well together as two heads. My other counterpart then explained how one man would have to marry the other, but then they would have to have another wedding for the second man to then marry the first (a joke based on the two verbs above). Then if it were two women together, they would never have a successful life and household as two tails without a head…

Many other fascinating assumptions and judgments were brought up and fleshed out during our discussion. I know by the end, my two friends were definitely thinking about all the new ideas I introduced, and I felt so satisfied and invigorated because of the new perceptions and thoughts they shared with me. It was really compelling to take their judgments and opinions about homosexuality back to their roots in the power values of the Tanzanian culture (which is heavily influenced by Christianity in my village).

My counterparts and I may not see exactly eye to eye on this topic (and many others), but I am so happy and proud that my friendships in my community have reached a level of trust and understanding to allow such deep discussions (and cultural exchange) to take place. We may have our cultural differences, but we are all learning how to look past surface perceptions to see the vast world beneath that can give explanation and reason to the misunderstood. Patience, curiosity, humility, and respect: the traits that will allow understanding and peace to proliferate. 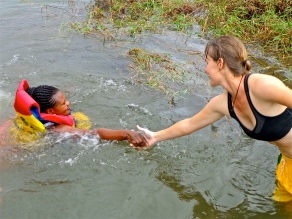