I am back in my village and it is raining. The rain began immediately following the completion of my laundry – second rinse cycle… A long second rinse cycle. Oh well, at least I’ll be able to collect a lot of the rainwater for later use. I returned from my vacation to find GREEN in my courtyard – lots of weeds, but also some veggies growing! The mchicha (spinach) in my bag garden is flourishing (maybe a bit too much), and the watermelon is starting to grow. Also, the squash and cucumbers in my permagarden are off to a great start. The lettuce is struggling, unfortunately. I’m going to plant some kale soon, and hopefully that’ll like my soils and the hard rains a bit better. After two weeks without supervision, the soil in the bottles of my vertical garden dried out, so nothing is growing in those. And then the green pepper and broccoli I planted in the powdered milk and peanut butter containers got too much water, and most of them drowned. I’ll have to try again with those, and actually monitor them. Also on the to-do list: weeding… so much weeding… 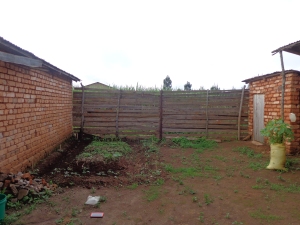 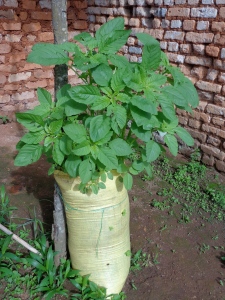 Another thing that flourished while I was away: mushrooms in my bafu (bathing room)! 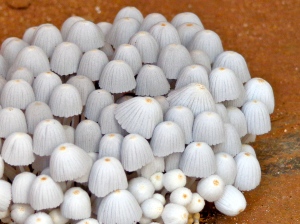 I’ll be meeting with my secondary school teacher contact next week to discuss two programs I’d like to teach – an environment, conservation, and agriculture (ECA) club, and a series of gender equality lessons. I’ll also meet with the primary school head teacher to talk about implementing the ECA club, weekly life skills lessons, and the Maua Mazuri program (an empowerment program for girls using various art forms). I will visit the Ward Executive Officer, as well, to check up on the progress of bringing water engineers to the village to survey our current water technology. I turned over the task of organizing their visit, but I’m thinking I might need to get more involved again so that it might actually happen in this decade.

I’m only in the village for a few weeks, and then I’ll be off to a training of trainers. I will be a resource PCV (Peace Corps Volunteer), working and teaching for one week during the new health/ag class’s pre-service training. That should be a great experience – and fun.

Anyway, how about some details about my wonderful two week vacation? Well, first of all, it was wonderful, as mentioned previously. Before the long bus ride to Livingstone, I did a lovely hike to Crater Lake in Mbeya, and spent Christmas day lounging, drinking cocktails, and eating good food at a fancy hotel. All with some great people. Then we spent a full 24 plus hours (I lost track…) busing Mbeya to the border, the border to Lusaka, Lusaka to Livingstone. It was a loooong trip, but uneventful. The border crossing and VISA purchasing went well, and there were no issues with long lines or anything. Then we got to Livingstone, walked to our backpackers, Fawlty Towers (highly recommended), and began to experience the luxuries of life in Zambia.

First of all, there was an actual grocery store across the street. I needed to put that out there. They had bar codes, and gluten free soy sauce, and a deli and bakery section, and cold chocolate milk, and … oh, it was just so amazing, and I miss it so much. In other news, I wore shorts every day. So nice. And tank tops too! We swam in the pool, took actual showers every day, cooked yummy meals in the kitchen, put stuff in the refrigerators and freezers, washed our clothes in an actual washing machine… We were living it up! AND they have my favorite hard cider from South Africa here in Zambia: Hunter’s Dry. Oh, life.

The other amazing thing about Zambia is that we could experience the underappreciated sensation of anonymity. We weren’t constantly harassed by attention-seeking locals who constantly attempt to elicit some kind of reaction from passing wazungu (white people). It’s nice not being a zoo animal. I cannot express the feeling of freedom I enjoyed while walking around town – so liberating, and really revitalizing. I miss that even more than the grocery store.

Anyway, the original purpose of our adventure to Livingstone and Victoria Falls, besides seeing the great natural wonder, was to attend the Vic Falls Carnival – a three-day music festival. The first day consisted of a late afternoon train ride into the bush where a DJ totally tore it up until the wee hours. Unfortunately, staying in Livingstone, not in Victoria Falls, and with the border closing at 10:00pm, we had to leave early to barely make it back across the bridge in time. We cut it close, and almost had to spend the night in no man’s land with the baboons. Still, after a short run to make it in time, and 4+ hours of hard dancing, it was a great night. We did almost hit a warthog in the taxi on the way back (with 9 of us piled in there – I was in the trunk), but luckily we narrowly avoided it! They should have signs for those…

The second day of the festival was just some DJs playing in various locations around Victoria Falls (the town), so most of us skipped out on that night and recuperated a bit to prep for New Year’s Eve. I danced for hours at a bar across from the backpackers the night before the train party, then the train party involved many more hours of dancing, so I was exhausted – and my knee was really quite swollen. (It’s better now, after a week of recovery!) We had a delicious dinner out, sipped wine and played cards, and went for a late night swim – a great evening.

The best night for music was New Year’s Eve because there were a few live bands – and they were really good! All from South Africa, they rocked it, and I brought in the New Year with head banging and my favorite dance move – I call it the pogo stick. When midnight hit, they launched out some big blow up balls, and confetti. They also had a snow machine, and I was at the very front, so I actually got snowed on (fun). Plus, there was a man breathing fire right in front of and over me as well. That was pretty great. We kept on dancing until about 3:00am, then we wandered to a place where other PCVs were staying, and then went downtown to find a cafeteria serving food. Some people got delicious-looking pizza, and I got some ice cream. Then at about 5:30am, we walked to the border to wait for the 6:00am opening. 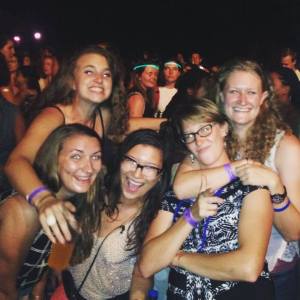 We rested up that day, and then ventured back to Zimbabwe for a sunset booze cruise on the Zambezi. The unlimited drinks and cocktails were delicious, and we saw endless hippos. 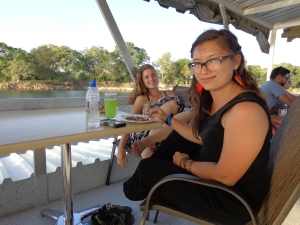 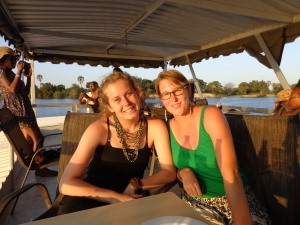 The sunset was also gorgeous.

To backtrack a bit, the morning after the train party, we woke up at 5:00am to go on an elephant walk in Zimbabwe. That was a surprisingly peaceful experience. The birds were chirping, and the soft-footed elephants seemed to glide through the bush with us on their back as the sun rose. After the walk, we had a delicious breakfast at a nearby lodge. 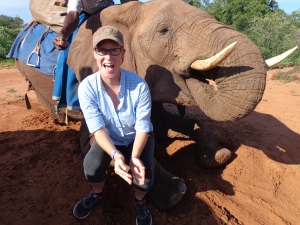 We, of course, also went to see Victoria Falls, before the music festival started. We went to the park on the Zimbabwe side, which is supposed to have more water visible during the dry season. Our visit began with beautiful sunshine, lighting the mist on the green leaves, creating rainbows across the chasm. And then a huge storm came rolling in. It was a powerful experience standing across from the thundering falls with pounding rain soaking us to the skin, and actual thunder crashing in the distance. It cleared up a bit, and the rain paused for our last viewpoint, but we booked it back to the trees when our hair started to stand up in clumps on its own – lightening seemed to be a bit too close. 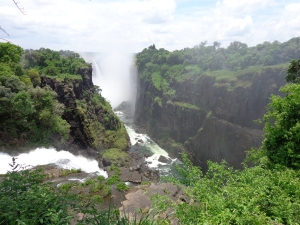 Luckily, the 24+ hour bus ride back to Mbeya seemed to go much faster on the return trip. I was just so exhausted – I only woke up for bathroom stops, to transfer buses, and to cross the border. We had two days of recovery in Mbeya, which involved sleeping, playing games, watching Disney movies, and eating Indian food: just magnificent. Then I faced the hard fact that my vacation had come to an end, and I returned to my village and my house overrun with spider webs. I can safely say that after such a well-balanced, adventure-ful, and FUN trip, I’m feeling calm and revitalized, ready for whatever up or down is in store for me next.